At the end of last year, I gave birth to my first baby. V is smart, happy, + beautiful. The future for V is beaming with possibilities + will most definitely be filled with the love of parents, grandparents, family, + friends. In addition to all of this, racism has a hold on my newborn child. Not racism of the KKK-type, but as in the system that has been propelling her forward while indoctrinating her with biases + misconceptions of Black + Brown people.

How can I possibly suggest my daughter is already privileged by racism? Hear me out.. V was born into a system: first, she is a beneficiary of a racist society; second, she is indoctrinated with biases that she may or may not consciously acknowledge as she grows older. A denial of this reality is both utterly wrong + reflective of privileged white folks choosing to disavow themselves from owning their role in the perpetuation of injustice.

Systemic racism is a venomous society where membership is automatic + must be rejected not once, but in perpetuity, at every turn where it affords you privileges, both visible + invisible to the untrained eye. 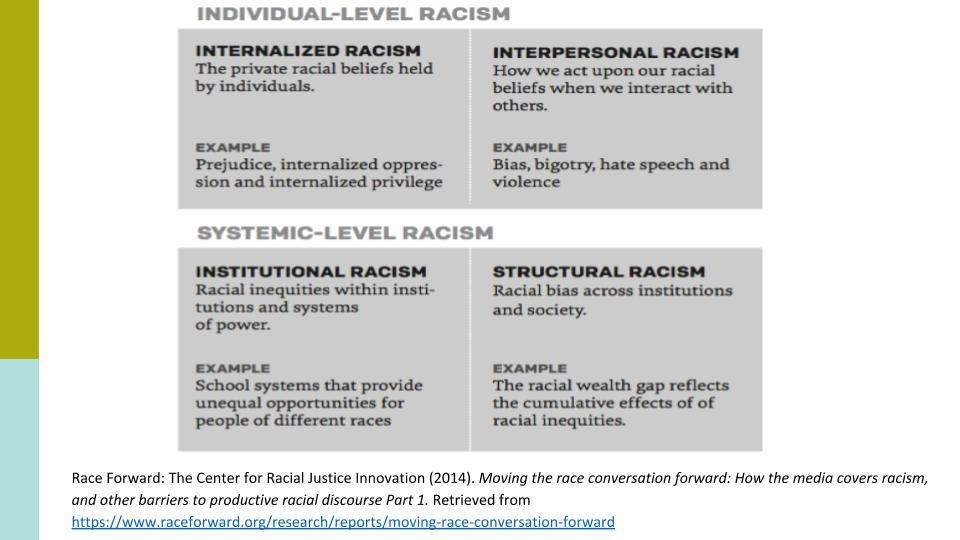 Let me get concrete for you. My child was born with white skin. From the moment she entered the world, quite literally, in the hospital, the faces she saw, the people who first cared for her… looked like her. She was born to a mother with white skin (me) + a father with white skin. I did not face great risks in pregnancy or childbirth. According to the CDC, Black women are 3-4x more likely to die from complications related to pregnancy and childbirth than white women like me. In fact, more broadly, I am more likely to live longer, have greater access to pain medication + mental health treatment, and certainly to have medical professionals who look like me responsible for my care. These are not the experiences of all mothers or all women or all people, generally. Beyond my racial privileges, I, and by default, my daughter, also benefited from privileges because of my socioeconomic status + because of my status as a cis, straight person. So you see, before my daughter was even a week old, she slept on pillows of privilege that neither she, nor I, did anything to earn. But, membership requires no prerequisites. Nothing must be proven. It is all automatic. And there’s more…

A few days after V was born, we drove home from the hospital, likely recklessly, probably not obeying all the laws of the road. We were far too focused on the little peanut in the car with us. I also acknowledge that we, consciously + unconsciously, know that white folks are stopped by police at disproportionately lower rates than Black + Brown folks. Again because of nothing more than the system, the racist society, in which we are members.

This trip home is important too because V entered a world where I had a job with parental leave benefits, allowing me to spend the first few months at home with her. This job is also a manifestation of the benefits that the society of systemic racism, affords me. A 2017 study found that racial discrimination was no different than it was in 1989, with the exception of a slight decrease in anti-Latinx discrimination. My positionality as a white, Puerto Rican, doesn’t exempt me. I, too, have been a member since birth.

In the first 5 days of life, my child lived + breathed in a racist system. She had barely opened her eyes or cried her first tears before her life took a particular trajectory because of her skin color, because of the skin color of her parents. The biases she already is developing are documented. By 6-9 months, infants stare longer at faces of their own racial groups + “older but not younger infants associate own-race faces with happy music and other-race faces with sad music.” 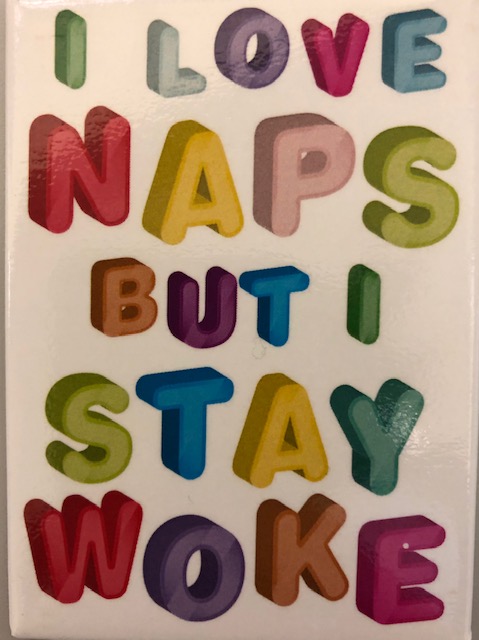 Let me step away from the concrete a bit. Systemic racism, the not-so-secret society, is a machine. One that is fueled by “the way we do things here,” by “the way it’s always been done,” by “history,” by nothing + everything, no one + everyone at the same time. If every white person decided to call in sick tomorrow, not even get out of bed, white privilege would still exist. Racism would still exist. The only movement that isn’t automatic is the fight against it, the swim against the tide, the conscious unlearning + disorientation, the dismantling of the structure.

I pull from Beverly Daniel Tatum’s description of racism as a system that advantages + disadvantages people based on race. My daughter is advantaged. Every breath she takes, everyday she benefits, she perpetuates the status quo, she allows the wheels of the machine to continue turning. Her complacency is and will continue to be its fuel. Her inaction or even lack of awareness serves as payment of her membership dues in this vicious society.

I see my role as of parent as modeling + teaching V that this system exists, that her membership was guaranteed from the moment my partner and I knew we were pregnant. And, most importantly, that she has a part to play to actively reject it. A responsibility that I try to model everyday. I, too, am accountable for developing a critical consciousness in her that will eventually serve to support her acknowledging + interrupting her own biases. The world has already started to communicate narratives to her, single stories about groups of people. To confront this, I am doing things like meticulously curating her bookshelf. 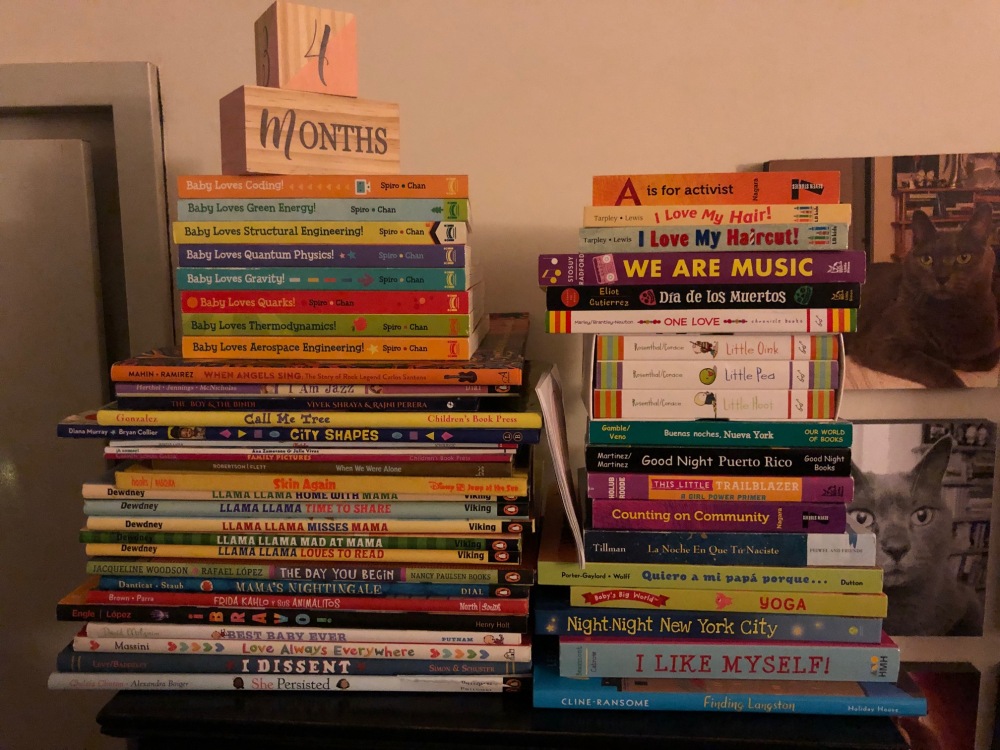 However, I also know she will head to school one day + read Dr. Suess. It is my job to develop her critical thinking skills, to demand that SHE demand more from her teachers + the books they put in front of her + her future classmates. This way, when she encounters Dr. Suess, whose lesser known writings perpetuated numerous racist tropes, and whose well known texts often offer troubling messages of exclusion, she will employ her consciousness + not accept that just because a story is written a certain way, or because a history is told to her, that it’s right or true. I know there are conversations yet to be had about Halloween costumes + holidays + the intersection of my/her whiteness + our Puerto Rican ethnicity. I anticipate this work will prompt her, as it does me, to confront our racism. It will require that she acknowledge + understand her impact as someone who walks into rooms in the skin of a colonizer. An enslaver. A racist. And it is my promise to her + myself that everyday we will work to decolonize, to disrupt + dismantle, + to disavow the system, the bias, + the indoctrination by using every 24 hours as another opportunity to manifest a world that is just + equitable.

3 thoughts on “Racism’s hold on my newborn child”

The author of this blog is Natalie McCabe Zwerger, an educator, advocate, mami + believer in intentional work to disrupt + dismantle inequity + injustice within our spheres of influence.
Loading Comments...
Comment
×
%d bloggers like this: