[The author of this article is a third year NYU Gallatin student, Alex Boone,  who interns for the NYU Metro Center’s Center for Strategic Solutions. Her individualized studies concentrate on the traumatic pathology of whiteness in educational institutions, and the effect it has on youth identity development. She writes to her audience from the perspective (and through the lens) of a multi-racial, ethnically African American, both privileged and oppressed, young adult. The inquiry of this article was inspired by an elective she took last semester in the Social and Cultural Analysis department at NYU.]

If you are reading this article, it is likely that you have been welcomed into the NYU Metro family, a collaborative network of thinkers with similar passions and world views. As members of this community, we share both a collective and individual commitment to create sustainable spaces for equity and joy in educational environments. One of the many professional development workshops that we at the Center for Strategic Solutions provide nationwide is the 7-part Critically Conscious Educators Rising (CCER) series for educators, school staff, school administrators, parents, and district leaders. Participants in this series receive monthly, co-facilitated sessions on how to adapt a critically conscious lifestyle as both human beings and educators.

When the Equity Coaches begin the year of facilitating the CCER sessions, they start with reflective inquiry activities, hoping that people will be able to find themselves on a complicated continuum of historical, ongoing, and contemporary racial oppression in the United States. Building the collective and individual framework for critical consciousness and anti-racist lifestyles requires an intimate examination of our own positionality within systems of oppression, the power and privilege that is created by these systems, as well as the responsibility and action it will take to impact our direct and distant spheres of influence with the hopes of moving toward a more equitable future.

I began this article to inquire about and interrogate the roots of community and ‘consciousness building’ that are central tenants in the CCER series. As an intern for the Center for Strategic Solutions, I have had the ongoing pleasure of reading the feedback forms we give to hundreds of participants after all our sessions, CCER included. One of the most common themes I noticed while listening to what folks had learned and absorbed as a result of the sessions, was a mindset shift from an individualistic perspective, to that of a more collective/ community-oriented perspective. Unsurprisingly, one of the tasks that critically conscious and culturally responsive educators are tasked with is creating welcoming and inclusive learning spaces for everyone, but especially the students who experience the most marginalization.

To the Equity Coaches at Metro, CCER and culturally sustaining teaching practices are considered to be two sides of the same coin, inseparable from one another. In an article titled “For White Folks who Teach in the Hood: A Lesson in Campus Colonialism” author Christopher Emdin discusses the cultural politics of indigeneity in the classroom, and the needs of ‘neo-indigenous’ students living within the US. He draws a complex comparison between the historical educational oppression of Native Americans, and low-income black and brown communities in the US. He writes “many urban youth of color describe oppressive places that have a primary goal of imposing rules and maintaining control” (Emdin). Emdin places urban youth within the framework of neo-indigeneity because their experiences follow the pattern of ‘imagined communities that transcend place and time, and connect groups of people based on their shared experiences,” as well as the similar systems of domination and control they face on a daily basis. If youth of color can be conceptualized as sharing similar experiences to indigenous Americans, what is required for culturally sustaining pedagogy (and educators) to not only create equitable spaces, but magic in their classrooms?

The critical self awareness required of educators during CCER’s process of creating sustainable and equitable spaces for learning, often forges a mindset shift from an individual to collective perspective, intimately intertwining self with ‘other.’ Below I have a chart from Zaretta Hammond’s book Culturally Responsive Teaching and the Brain, identifying the components of both individualistic and collectivist cultures and societies.

It is no secret that as people residing in the United States, we live in a very ‘W.E.I.R.D.’* society: Western, Educated, Industrialized, Rich, and Democratic. Consequently, all these forces working together create a network of separate individuals operating ‘collectively’ under the guise of American democracy. Furthermore, the lens that allows people to conceptualize individuality and individual merit is taught, supported, and perpetuated in our educational institutions and by our educators every day. Individualism is a central tenet of public education and core curriculum in the US, and failing to learn the gilded myth of the ‘American Dream,’ has the effect of marginalizing students and adults even more.

Individualism in the United States is culturally informed, and is sustained through coercive cultural practices disguised as educational learning norms within the walls of our schools. In reality, individualistic merit is coupled with systemic oppression and structural inequality, resulting in those possessing dominant identities acquiring added symbolic and material benefits, manifesting in educational success within our learning institutions. Additionally, the structural and systemic racial and gender inequities present in this country since its foundation disallow marginalized youth from conceptualizing themselves as individual agents, and thus have been contemporarily and historically excluded from the benefits of possessive individualism.

When I noticed the growing number of educators shifting their mindset from individual to collective, I started to wonder about the roots of collectivist lifestyles, and community building practices in the United States. As I began my inquiry, it was important for me to realize that the reality of the U.S. as it is was constructed very purposefully and over time, following the logic of settler colonialism and elimination of all that was not considered profitable, in turn, erasing the cultures and interpersonal practices of indigenous communities that have resided on this land far before any pale faces were seen on the shore.

At the time when settler colonialism began in the United States, the newly laid foundation for the American republic necessitated both psychic and physical violence to ensure that capitalism had the space to flourish and perpetuate itself. Settler colonialism represents an ongoing process, rather than an event fixed in the history of the past. Consequently, settler colonialism, the physical and ideological structures of the imperialist conquest of non-white bodies has moved through time, shifting and multiplying to fit the current socio-political climate. The settler colonialism process unique to the United States mirrors the logic of elimination, supporting the eradication of indigenous populations, powers, and ways of life.

However, the U.S. repeatedly (and selectively) returns to the indigenous practices it destroyed, extracting fragments of native culture, often times used only to further the bounds of capitalist production and consumption. This relationship between dominant socio-political hegemonies and the fractured legacy of indigenous cultures both replicates and sustains imperialist nostalgia.

Renato Rosaldo, author of a journal article titled “Imperialist Nostalgia,” writes that ‘imperialist nostalgia revolves around a paradox… someone deliberately alters a form of life and then regrets that things have not remained as they were prior to his or her intervention… [this] kind of nostalgia is known most intimately in societies with a legacy (ongoing) of imperialism and structural colonialism’ (Rosaldo, 108). The imperialist nostalgia that operates in American society today has positioned the Native figure as both fixed in time at the moment of settlement, and also as a modern contributor to the national American identity. This relationship can be seen most clearly in the American Sports industry, which has continuously stolen material heritage and cultural practices from indigenous communities, whether that means the ‘spirit of community’ at sporting events, or the infamous Indian mascot that has collected profit in many regional societies in the US. 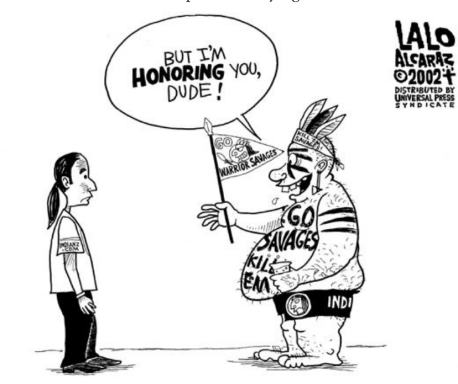 Becoming familiar with critical consciousness and adopting a critically aware & community-oriented mindset in everyday life routines and educational practices requires empathy, understanding, and acceptance of marginalized adults and youth, their histories, and the identities within relation to one another and dominant cultural hegemonies in the U.S. This paradigm shift requires a reconceptualization of the self as intimately intertwined with ‘the other,’ and in doing so, the fabric of accepting and equitable community environments is built. However, this much needed paradigm shift also mirrors many of the same violent ideological practices and structures that are embedded within the legacy of settler colonialist societies, such as imperialist nostalgia and a seemingly benign longing for the ways of interpersonal relationship building with self and other that were completely washed away to make way for Democratic ideals, political systems, and an individualistic conceptualization of self, most famously coined as both collective and individual participation in the American Dream.

So, what now? Becoming critically conscious requires more than good intentions, and instead prompts us to inquire about how we (as individuals and members of a community) contribute to, and benefit from historic and ongoing systems of oppression. Consequently, as people living within, and being affected by the legacy of a settler colonialist society, if we never ask ourselves “why,” and never interrogate where our “why’s” came from, we are doomed to repeat the same mistakes as people with good intentions operating without all the historical information. Lastly, we may not participate in the violent process of fragmentation, and take another’s culture without asking, ever. Instead, we must adopt these processes while honoring how they have influenced and built indigenous/ collectivist communities into what they are today. If CCER is culturally informed by fragments of collectivist cultures, then we should all use the tools of critical self awareness to prompt ourselves to disrupt the erasure and coercive silencing of indigenous and neo-indigenous communities and practices. Additionally, we must take the time to examine our own privilege and power, and the role that it has played in either reviving or destroying ways of life that operate differently than our natural instincts of human relation.

The author of this blog is Natalie McCabe Zwerger, an educator, advocate, + believer in intentional work to disrupt + dismantle inequity + injustice within our spheres of influence.
%d bloggers like this: