Van Jones categorized it as a whitelash. Jay Smooth tells us hate won. For those of you who are writing on Facebook: “How could America do this? How could this happen?” #wakeup. This has been happening. Generations of “America’s racially antagonistic foundation, history, present, zeitgeist, and legacy” (Young, 2016) have brought us to this moment. This moment was always possible. Probable, if not inevitable.

“Dear liberal white people whom I often love: advertising your shock and surprise that racism, sexism, xenophobia, and bigotry are pervasive enough to hand that man the Presidency is a microaggression. Please stop.” (Parker West, 2016)

“They” say calling out racism, sexism, Islamophobia, and misogyny is divisive. We say it’s instructive. We say it’s imperative. We say it’s illustrative of the parameters of what we are resisting. Of the barriers we have to break down. Of the hate we must disrupt and dismantle by countering with love.

For those of us who walk with skin or hair (or other physicalities) or names or accents that identify us as members of groups targeted for hate, we don’t have the luxury of blissfully ignoring these ISMs. We don’t have that choice.

We have witnessed the impact this election season has had on our kids. From the elementary school where students were playing Trump Tag (you tag the Mexicans and they get deported) to the students who have been “emboldened by the divisive, often juvenile rhetoric of the campaign” (SPLC, 2016) to the palpable fear immigrant students felt about being deported to the classroom conversations today where kids are asking, “Did he cheat?”

It is us who will be taking this country back.

For those of you who espouse unity and bringing the country together; for those of you who have basked in the luxury of never being targeted for who you are, we say #wakeup. You see the unity “they” speak of is a unity that refrains from awakening “their” tired white supremacist eyes from a long slumber. A generational slumber cushioned on fancy hotel quality high thread count sheets of privilege and pillows of power. The unity “they” want maintains the status quo, reinforces racial, ethnic, religious, and gender hierarchies. And we won’t stand for this. We won’t allow this. This ends today. This illusion, this blissful dream of whiteness can no longer be the center our collective consciousness.

For white liberals asking for salt, when the pale chicken wasn’t enough | White liberals you no longer have the option to hide behind the ideals of freedom fighters, absorb yourself in communities of color pushing for change. No white liberals your job is to take a seat at YOUR kitchen table. You need to face your family. Your lineage. your ancestry. Now that 60 million votes by a white majority in this country have voted in a man who has legitimized and normalized hatred against all non-white, heteronormative, male, Judeo-Christian people. It’s your time to get in formation and listen to your people. Your guilt is apparent & ultimately self serving no matter how deeply embedded underneath Malcolm X t shirts or Kanye west albums that serve as your symbols of a more liberal separate identity in your imagination of progress. No amount of black friends or mixed children you accumulate will do anything to correct the persisting white supremacist injustices that are ripping apart the lives of black, brown, queer, Muslim and women folk. These communities become your cloak, your hideaway. Keyword: your.  It does nothing for the marginalized communities that you choose to hide within or gentrify out. You came to the inner cities of SF, Oakland, Bronx to live in communities that we were forcefully segregated into. Places your parents and grandparents thought were too unsafe for you. Our parents cleaned those communities and worked the long grind to made makeshift safe places out of discarded and forgotten cities. We found love there and made the multicultural havens that you now run to for salvation. What did your parents do? What choices did they make? Your ancestry is always with you. But you choose to ignore these parts of yourself, manifesting paths of colorblindness and dreams of diversity. Now that you can say you lived near JayZ’s project it’s time to do the real work. Instead of taking an expedition to Africa or an inner city to sublimate and hide your own history. It’s time for you to face the truth brought to you by 60 million of your cousins, sisters, brothers, aunties, uncles and grandparents. It’s time for you to end the dream that because you moved away and no longer have to hear the racial slurs of your grandparents that you are somehow exonerated. You have to face the reality that somehow the good people that raised you are bad people to people who don’t look like you. Moving to another place did nothing to erase this. You just saved yourself. You ignored the main tenant that marginalized communities have fought along, the disenfranchisement of one is the disenfranchisement of all. You weren’t taught that and this is a part of your oppression. As a black woman raised Muslim, I have been reminded everyday of my life that I cannot rely on unalienable rights in this country through the visceral lived experiences of my grandmothers, and fathers pain, terror and struggle to live. I invite you, white people, to sit at the table and really hear and ingest what it really means to be a white American. What was the role of your family in the making of this hateful America? Your loved ones voted to make America the great place only they want to return. Why is that white america? You can no longer hide under, beneath or around me with your tears your guilt and your lack of awareness, you have history at your table just as much as I had the fill of mine. This meal that we live on today comes with its own historical legacy & present day consequences. Today, white america will you have the courage to face your own and eat of the plate which made you? (Umi Says, 2016)

We continue to fight. Join us. 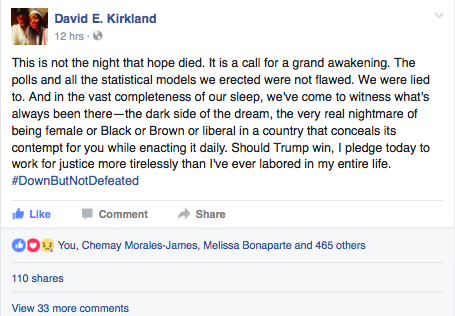 In classrooms, draw from liberatory resources. It is incumbent upon us to explain to our kids the hypocrisy that this country, built on grand ideals of freedom and justice, intentionally selects who accesses those ideals and who does not. Practice self-care so that you have the strength to continue the fight. Give yourself time to process and regroup. Keep history at the forefront of conversations about moving forward. The title of the new book by David Billings could not be more timely, Deep Denial: The Persistence of White Supremacy in United States History and Life.

Empower student voice and impress upon white students that their silence is dangerous. The unity “they” are asking us for is meant to silence resistance. Meant to silence truth. The resistance has already begun today with protests and walkouts at schools in multiple states.

“If you have a critique for the resistance, for our resistance, then you better have an established record of critique of our oppression. If you have no interest in equal rights for black people then do not make suggestions to those who do. Sit down.” (Jesse Williams, 2016)

Are you with us?

3 thoughts on “Shock and awe: Two emotions. Neither of which we should feel after last night”

The author of this blog is Natalie McCabe Zwerger, an educator, advocate, mami + believer in intentional work to disrupt + dismantle inequity + injustice within our spheres of influence.
Loading Comments...
%d bloggers like this: